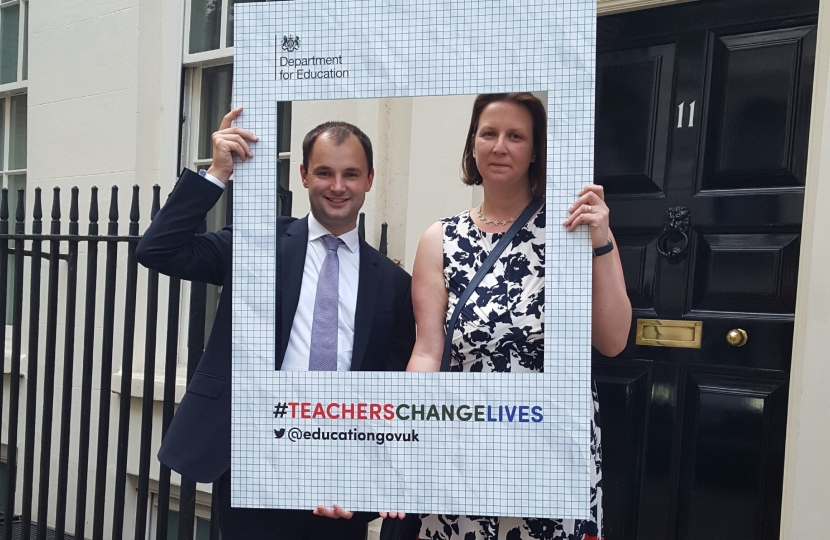 Teacher Jacqui Powell, at the Outstanding-rated Watermore Primary School in Frampton Cotterell, along with local MP Luke Hall, attended a reception with the Prime Minister in Downing Street on Monday, to recognise the vital work that teachers do throughout the UK.

Jacqui was nominated by Watermore Primary Headteacher, Janet Hoyle, and MP Luke Hall, for her outstanding contribution to achieving the school’s success, and for always going the extra mile for her colleagues, parents and all of her pupils.

In Westminster, Luke gave Mrs Powell a tour of Parliament and the chance to witness the workings of the House of Commons in action. They then headed over to Downing Street, where Jacqui had the opportunity to talk with Education Ministers, and to share her experiences of teaching in Britain today. The teachers were given a full tour inside Number 10, before the Prime Minister spoke to praise their outstanding contribution.

Speaking afterwards Jacqui said; “It was a privilege to be invited to Downing Street by Luke and the Prime Minister, and I am thrilled to see the hard work of teachers across South Gloucestershire being recognised in this way. I was delighted to hear the Prime Minister’s commitment to working with teachers to help nurture the next generation of young people.”

Commenting on the day, Luke Hall said: “Teachers provide an invaluable service to our community, and I was delighted to see Jacqui receive the recognition she deserves for all her hard work. This was a fantastic opportunity to recognise the work that all our teachers do to unlock the potential our children in South Gloucestershire.”