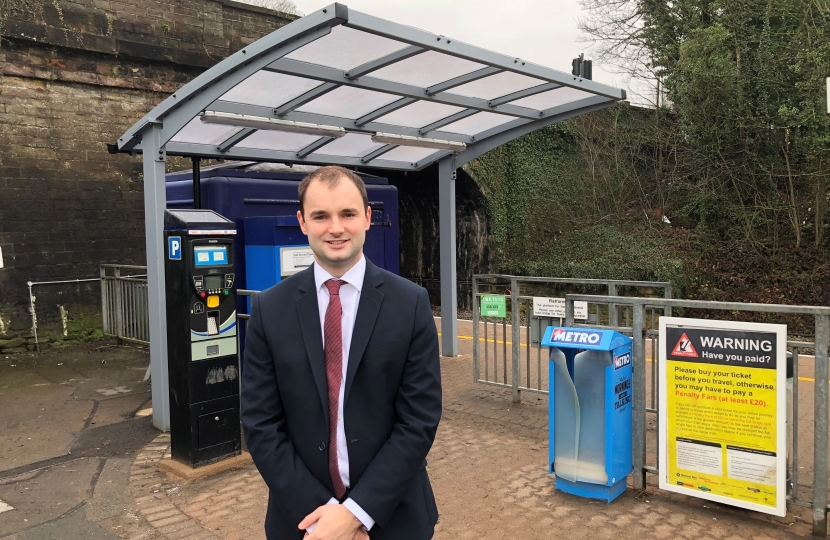 Local MP Luke Hall has welcomed recent improvements to our town’s train station as he continues to raise local concerns about transport issues as part of his successful “Get Yate Moving Campaign”. New shelters have now been installed for the ticket kiosk and machines at Yate railway station, thanks to pressure from Luke Hall MP and local residents for extra funding that will benefit Yate commuters and train users. In previous years this funding, which comes from the Council’s Capital Programme that looks at local minor rail stations, had been put towards renovations for places such as Severn Beach Station. This time the Council have worked in partnership with GWR and the Severnside Community Rail Partnership to bring these improvements to Yate.

These new machine covers will allow customers and train users to access the ticket machines in all weathers and be protected from adverse weather conditions all year round. These much-needed improvements have been welcomed by local MP and resident Luke Hall and by Yate residents, who will soon encounter a much more pleasant experience when using local train facilities. The new scheme of upgrades at Yate railway station is great news for the many local residents choosing to use Yate station to link to Bristol as an alternative to driving into the city, with the new shelters a definite step in the right direction for local infrastructure improvements.

Luke Hall MP said: “I am delighted to see that the Council has decided to allocate prioritised investments to our local Yate transport facilities. This new ticket shelter is a great result for local residents and for our “Get Yate Moving” Campaign, which continues to keep the focus on our local transport concerns. I look forward to continuing to work with the Council and GWR to bring further investments to our transport infrastructure, such as improved frequency of train services and a new 30 minute Yate-Bristol service”.