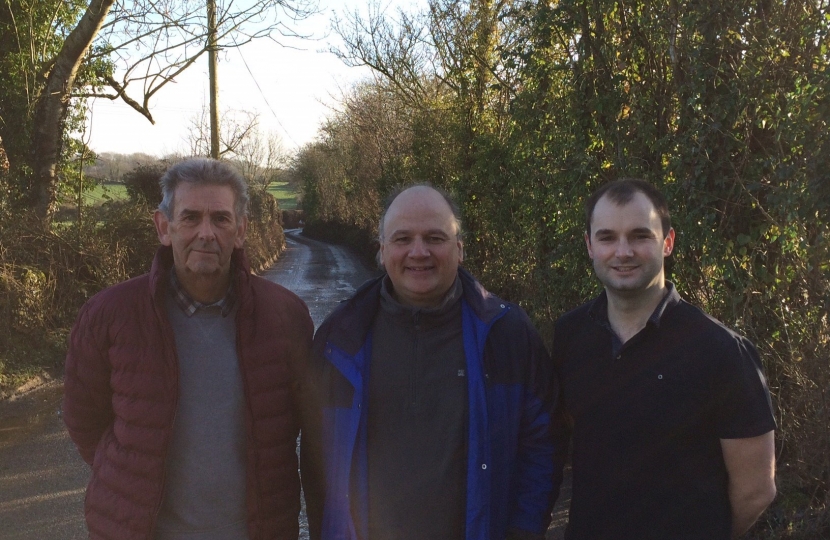 Crossways Lane, which runs from Gloucester Road to Morton Way, has seen a rapid rise of traffic in recent years, leading to community campaign which has continued to gather pace. At the heart of the campaign is the desire for a Quiet Lane Scheme to be introduced, something local resident Mavis Richings states would make a huge difference: “We have lived on Crossways Lane for 50 years now and are very aware of the huge increase and speed of traffic using the lane as a rat run to access routes north of Thornbury.”

Mrs Richings continued, “The lane is a real amenity for the people of Thornbury for walking, running, cycling, and horse riding. We feel that the time has come for something to be done, for everyone's safety.”

Having spoken with Crossways residents, Luke hastily contacted South Gloucestershire Council, asking for an assessment of the road safety in the area. The local MP asked for traffic calming measures to be considered and raised concerns about speeding along the increasingly busy road.

Speaking in Thornbury this week, Luke said, “There was growing concern about the safety on Crossways Lane and I am grateful for the help and support I have received from the Thornbury community in raising this matter with the local authority.”

The MP added, “This is a road frequently used by horse riders and cyclists, not to mention local children on their way to Crossways Junior and Infant Schools. I am pleased that this matter is receiving the Council’s full attention.”

Cllr David Chubb said, “Thanks to Luke and local residents, the Council is well aware of concerns, and I will be supporting any action which could be taken to make this road that little bit safer”.