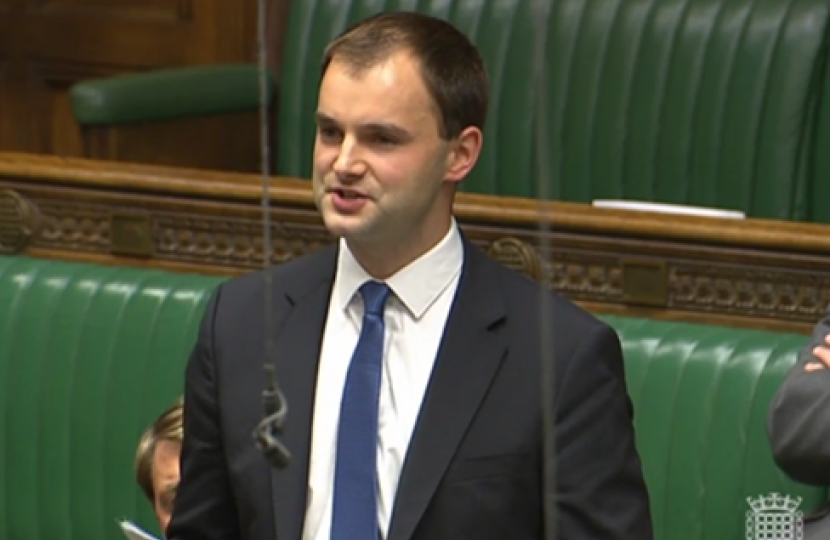 On 22nd June 2015 Luke Hall, the newly elected Member of Parliament for Thornbury & Yate, gave his maiden speech in the House of Commons.

In his speech Luke mentioned several of the local villages of the area, picking out interesting pieces of history and giving special mention to some of the areas most treasured possessions, both old and new. He also drew on his unique experiences of working in retail to promise that he would speak up for young people in work, and would help to ensure that education reflected the full range of opportunities offered to today's young people.

A video of the speech is available by clicking here. The text of Luke's speech is below:

Thank you madam deputy speaker for allowing me to make my maiden speech in this house.

I would first like to congratulate all Honourable Members who have made their speeches so far. There have been some very informative speeches and it has been great to hear that every Member is as passionate about their own constituency as I am mine.

The Thornbury and Yate constituency and its predecessor Northavon have been served by some outstanding Members of this House.

Including Lord Cope of Berkeley, and my immediate predecessor Professor Stephen Webb. I’d like to pay tribute to Professor Webb who served as a Member of this House form 1997 until 2015. I’m sure he’ll be particularly remembered for his work as Pensions Minister in the previous coalition government, overseeing major reforms to our pension system. Locally Professor Webb was a dedicated and hard-working member of parliament and I will exert every effort to emulate his dedication to our communities in South Gloucestershire.

Madam Deputy Speaker, Thornbury is a beautiful market town that has this year, once again, quite rightly been named as one of the most beautiful places to live in the UK by the Sunday Times. Yate predates the Domesday Book, is now home to over thirty-five thousand residents, and is the birthplace and early home of JK Rowling.

If you travel to the East you’ll come to Pucklechurch, where on 26th May 946 Edmund, King of All England, and grandson of Alfred the Great, was stabbed to death by a local thief who was exiled by the King. If you go north-east, you will come to Wickwar, where the Old Brewery used a water wheel from a local spring to create electricity with, making Wickwar the first village in the country to have electric street lights. If there is one thing that I can bring to this House, Madam Deputy Speaker, it is the ale of the current Wickwar Brewing Company, which will shortly be available in the House of Commons bar.

If you travel further West in the constituency towards the River Severn, you will find the beautiful towns and villages and hamlets surrounding Olveston, Alveston, and Tockington, and south-west from there you find the communities that surround Frampton Cotterell and my home village of Westerleigh.

This constituency is my home Madam Deputy Speaker, I am very proud to stand here as its new Member of Parliament. I’m also delighted to make my maiden speech during the second reading of the Education and Adoption debate. As someone who attended one of the original 15 city technology colleges, I can testify that having a good quality education helps to provide young people with the best start in life.

It should be part of the duty of our society, and this government, to inform young people about the opportunities that are available across all sectors after leaving education, including in retail.  Madam Deputy Speaker before entering this House I have worked in retail since leaving education, in every position from butcher, market stall trader, cleaner, caretaker, shelf-stacker, till worker, store manager, and most recently South West area manager. I have cleaned floors, sat on the tills, and pulled pallets.

I hope that in some way I can reflect the challenges that young people face in the workforce, and I fully intend to bring that experience to the floor of this House.

There is one short story I would like to share with the House, one that speaks volumes about the talents of our young people in this country.

In 2013 I went to meet some new apprentices during a day in college. I turned up at 9am and I asked one young apprentice, Danny Murphy, how he got to college that day. He said that his travel to work was slightly different that morning. The lorry was late last night, so he’d got up at 3am, walked from his house at 4am, put in an hour in the dark and the rain to get to the store to work the delivery before getting to college to do a full days study. He was 18 years old.

I’m very pleased to inform the House that Danny has now finished his apprentice. He has an NVQ Level 2 in Retail and is part of the management team running that store. He is a great example of how giving our young people the skills, the responsibility, and the pride in their work will allow them the opportunity to succeed.

I have to confess to be slightly surprised to find myself here Madam Deputy Speaker, in fact the only person more surprised than me was my employer. My employer when I phoned them up the day after the election and said “I think I’ve got a bit of an issue. I’ve just been elected as the Member of Parliament for Thornbury & Yate and I’m not coming back.”

They took it with incredible grace Madam Deputy Speaker, so much so that when I look back in years to come that I might be surprised and a little disappointed at how happy they were that I was elected, and to hear the news that I would not be returning to work.

It was Adam Smith Madam Speaker who in 1776 wrote that Britain was a ‘nation governed by shopkeepers’. I am a shopkeeper, I am proud to support this government, and I will bring the same energy and passion from the shop floor to the floor of this House.