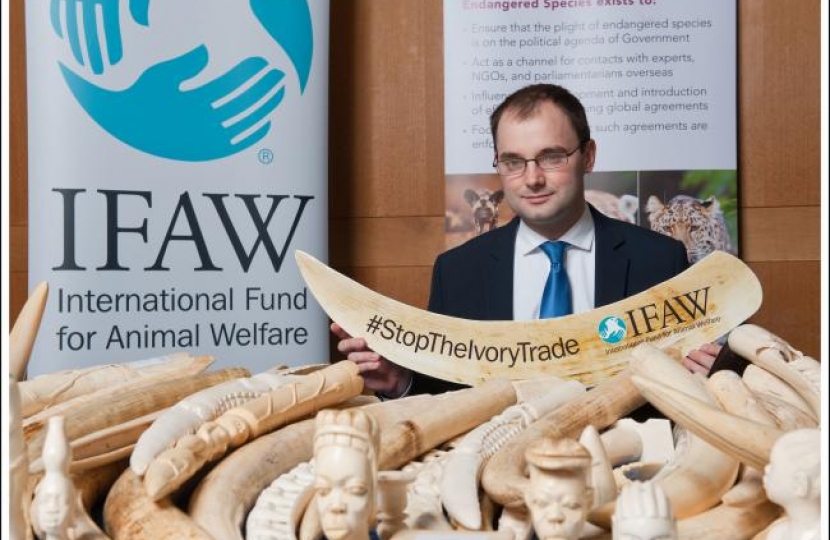 Following the campaign by local MP Luke Hall for a UK Ivory ban, it has today been announced that the UK will be introducing a ban on ivory sales.

This Historic decision is a personal success for Luke Hall, who has been one of the leading Parliamentary advocates for the closure of the UK’s domestic ivory markets. Last year he led a Westminster Hall Debate on this very issue, and has worked alongside representatives from the Environmental Investigation Agency, Zoological Society of London and TUSK.

This ban will be the strictest in Europe and amongst the toughest in the world, helping to protect elephants for future generations. The move follows a consultation which had more than 70,000 responses, with over 80% of them in favour of the ban.

The nationwide ban will cover ivory items of all ages – not only those produced after a certain date. The maximum available penalty for breaching the ban will be an unlimited fine or up to five years in jail.

“The continued decline of Africa’s elephant population in recent years is absolutely heart-breaking, and is an issue that I feel very passionate about. I am absolutely delighted that this conservative Government is taking action to ensure the future survival of these beautiful creatures.”

“Ivory should never be seen as a commodity for financial gain or a status symbol, so we will introduce one of the world’s toughest bans on ivory sales to protect elephants for future generations.

“The ban on ivory sales we will bring into law will reaffirm the UK’s global leadership on this critical issue, demonstrating our belief that the abhorrent ivory trade should become a thing of the past.”

"We are delighted that the Government has listened to our concerns and given the overwhelming public response to their consultation is now moving decisively to introduce tough legislation to ban the trade in ivory in the UK.

“The narrowly defined exemptions are pragmatic. The ban will ensure there is no value for modern day ivory and the tusks of recently poached elephants cannot enter the UK market. We welcome the fact that Ministers are sending such a clear message to the world that the illegal wildlife trade will not be tolerated and every effort will be made to halt the shocking decline in Africa’s elephant population in recent years.”