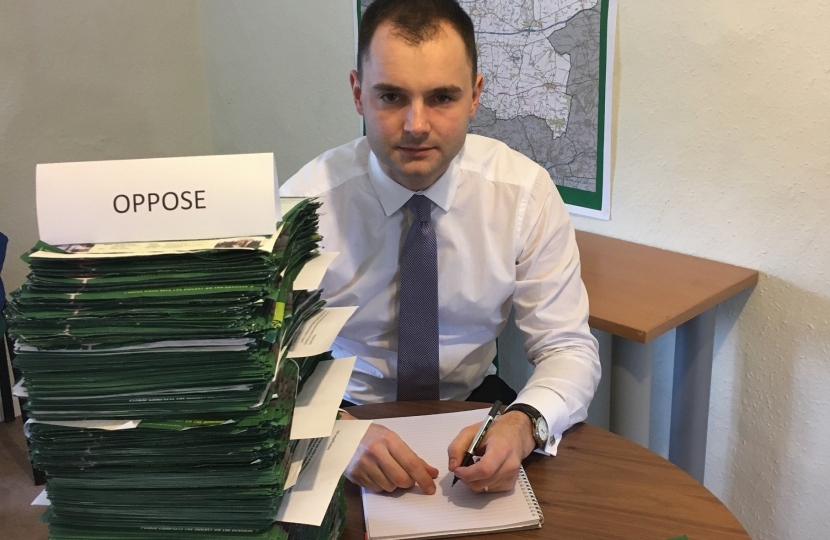 Local Thornbury and Yate MP Luke Hall has hit out at developers this week following recent statements and comments from St Mowden, and Tortworth estate which has suggested that a planning application for the unpopular and controversial 3,000 house extension of Thornbury town could come within the year.

The statement from the land promoters and developers announcing the partnership alongside their intention to rush through an application in 2019 has been met with upset and anger from campaign groups, residents, and local MP Luke Hall who has spearheaded the fierce opposition to the proposal which has been touted as a’ garden village’ since 2015.

The announcement of intent from the partnership comes just days before the official and final stage of consultation for the Joint Spatial Plan closed on the 10th of January, which gave communities, residents and MP’s the penultimate chance to have their say on the regional housing proposals. The comments receive will be addressed directly to the independent planning inspectorate who now has the responsibility of assessing the final plan and its soundness and compliance with national planning laws.

In his official submission the MP detailed substantial and technical objections to the proposals on behalf of Thornbury residents which included citing the controversial revelations late last year which had shown officials within the Council stating concerns and acknowledging the flaws of the project, particularly on the proposed supporting transport measures, and its physical A38 location.

The MP also included a 1,000’s strong petition gathered in 2015 in a town wide survey which demonstrated almost universal opposition the proposals, with 91% of those responding opposed.

The submission made by the MP is just the latest in a string of moves in opposing the proposals which have included;

The Joint Spatial Plan document and process is still yet to go through further phases of inspection and scrutiny with;

The JSP document highlights that the deliverable build out of the project, should it be approved, would begin in the mid 2020’s prompting concerns that suggestions of an application this year would be premature and risks any eventual plan being botched.

In response to the suggestion that an application could come by the end of the year, Luke Hall MP said;

“The suggestion by the land promoters of a ‘done deal’ as well as the intention to gather a rushed application together for what is simply a huge town extension will be met with justified disappointment and anger from residents, and rightly so.”

“Since these proposals have been announced our community has waged a huge campaign pointing out and highlighting the serious flaws in the plan, so any suggestion that this will go ahead is very premature. It does seem that this rush to get permission just further demonstrates their fears that this may not stand up under independent scrutiny.

I will be continuing to work alongside the community in fighting these proposals in the remaining phases, including in the examination in public, and as our MP I will continue to work in building on the existing awareness of its flaws at the highest levels of Government”.