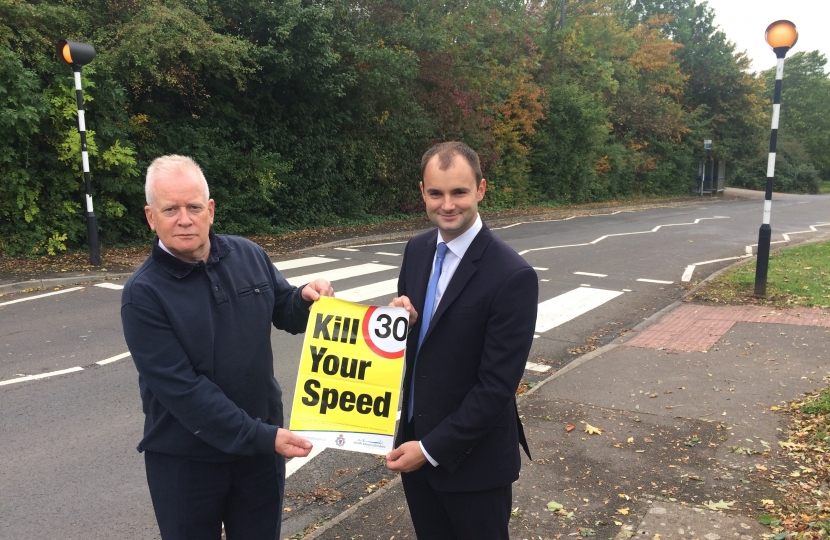 Local Campaigner, and Dodington Election candidate Ian Livermore began making progress on his community inspired campaign to tackle dangerous speeding in the area as South Gloucestershire Council and is now set to take steps to ensure that the varying speed limits for Shire Way and Rodford Way are clearer for drivers.

After jointly surveying every household in the community, with extra feedback from residents at Ians and Local MP Luke Hall’s drop in help surgery at Shireway Community centre in September, the issue of dangerous speeding alongside the neighbourhood’s man routes and a plan to tackle it became a clear priority for local people.

In response the MP and Ian Livermore have taken the following actions;

In addition to this, thanks to residents feedback, Ian raised the concerns of residents that too often there was some confusion for drivers of what the speed limit was on different parts of the main road.

In response to Ian and the MP pressing these concerns with the Leader of the Council Toby Savage, the Council now has plans to enhance the start points of two areas both at the Shireway/Rodford Way Junction, and near the Rodford Way Roundabout. The enhancement will take place in the form of roundels which are painted onto the road to remind drivers they are entering a new speed limit.

Ian said; “Firstly I’d like to thank everyone in the community that has provided me the support to press the case, and raising awareness of the issue. It seems that this has been a long running issue with little action taken but now with everyone’s support we are finally getting somewhere in taking on this issue!”

Local MP Luke said; “Ian has been working away tirelessly on this issue and he together we have been pushing both the Police and Council to respond to these concerns with action. This is good step in the right direction in being clearer on where each limit applies”.