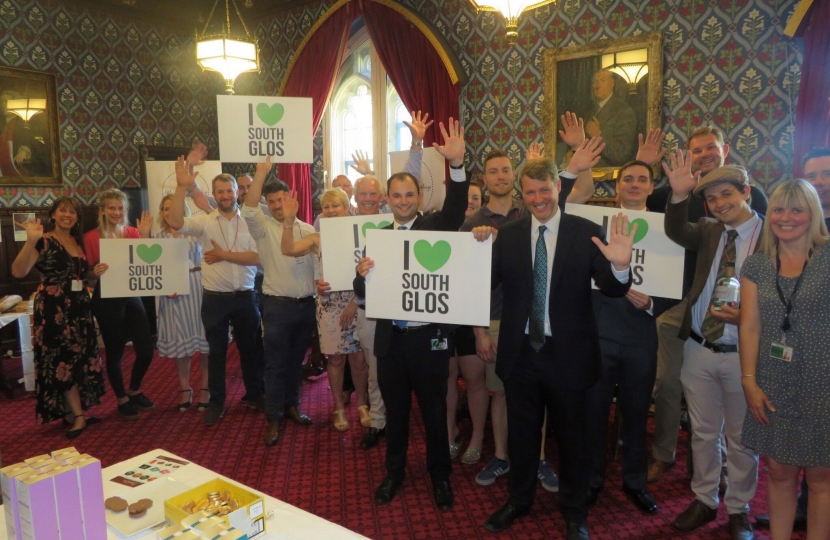 MPs, Lords, Houses of Parliament staff, Ministers and officials at the heart of Government were offered a taste of a wide range of South Gloucestershire’s high quality food and drink produce this week after Local MP Luke Hall, alongside Jack Lopresti MP (Filton and Bradley Stoke) and Chris Skidmore MP (Kingswood), led a hugely successfully and well attended event showcasing the area's businesses and their best produce.

The ‘Taste of South Gloucestershire’ event organised by Local MP Luke Hall was hosted in the Palace of Westminster and aimed to build on his efforts to promote our community, its businesses, and our produce, as well as firmly placing our area on the map.

Producers made the 100 mile trip to showcase at the event, the first of its kind organised for South Gloucestershire, where it drew a huge crowd from across Westminster.

Attendees were treated with samples of local products made right here in South Gloucestershire with products from:

The latest promotional effort comes after the MP’s strong record on backing our High Streets such as his support for Chipping Sodbury’s entry to the Governments ‘Great British High Street Awards’ in 2016, alongside the Chamber of Commerce.

Nicole from the Vintage Birdcage Cakery in Yate said: “It was such a great opportunity to be able to show everyone in Parliament what a great selection we have on offer from us here in South Glos, particularly our treats and cakes. Everyone who attended had great things to say about everyone's selections, and most people even came back for seconds! I really appreciated the chance to be part of it so I’m grateful to Luke for putting this on and promoting our area”.

“Our area has so much to offer the rest of the UK so I am always looking at ways to proudly promote our community across it, either in the Chamber or at events such as Tuesday's. It was hugely successful in demonstrating the high quality food, drink, and produce being made right here in South Gloucestershire. Judging by the feedback from Ministers, MPs and officials the event really put us on the map – and I’m hoping they will then take the message back to their communities – further supporting our producers”.