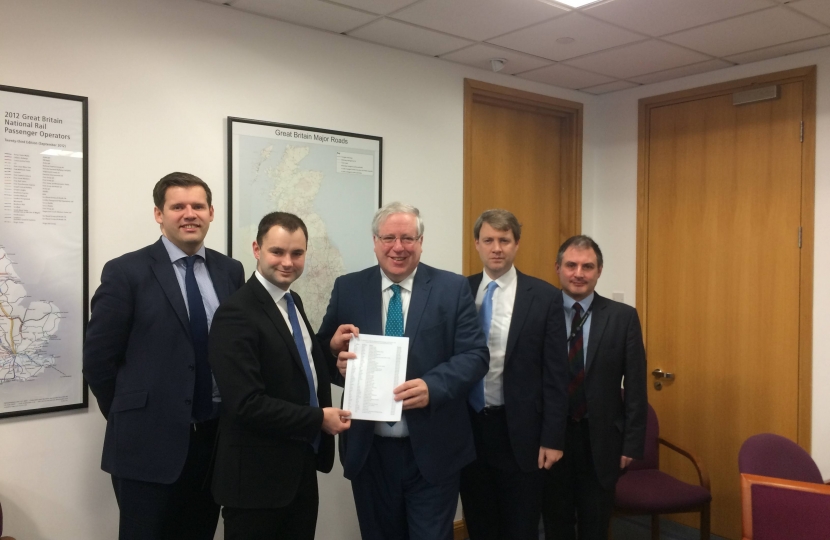 The campaign for a new ‘M4 Link’ in South Gloucestershire was bolstered this week after Local MP and infrastructure campaigner Luke Hall personally handed over a 1,100 plus signature petition to the Secretary of State for Transport Patrick Mcloughlin MP. The petition which attracted overwhelming support from residents, business and other local MP’s calls on the Government to commit to getting behind the project which Luke and other local MP’s hope will see congestion pressures taken off of the arterial Avon Ring Road that serves South Gloucestershire as well as contribute to reducing HGV traffic through close by villages in the area.

The campaign, which has attracted the support of a number of local MP’s, residents and over 100 local businesses was given hope by the Department for Transport with Transport Minister Andrew Jones last year describing the business case as “a very strong one”, and that it was “exactly the type of scheme” that could be included in the second round of the Road Investment Strategy.  The schemes economic benefits for the area were revealed in a report conducted by Bath University last year.

The meeting on Tuesday with the Transport Secretary represented a significant step forward for the campaign as Luke, along with neighbouring MP’s, pressed the potential they believe the project has for South Gloucestershire and the north fringe.

Commenting on the scheme, Patrick Mcgloughlin said: "I know just what a difference junction 18a on the M4 would make to Bristol and the surrounding areas. Transport has a key role in unlocking growth potential and I have seen for myself the plans that are in place if this scheme is built."

The cabinet minister continued, saying: "I am sure that local MPs and the LEP will continue to work together to promote the benefits of a new junction and I look forward to hearing more from the campaign."

Luke added: “Tuesdays meeting with the Secretary of State for Transport represents a real step forward for my campaign to see investment in local infrastructure such as the Junction 18A. It is great to see infrastructure improvements really back on the agenda here. The strength of the support from residents and local businesses has been overwhelming and has really helped bolster our case when we pressed the need for the junction in our meeting with him. I am delighted that campaign is progressing steadily and that the Department for Transport is open to the scheme”.