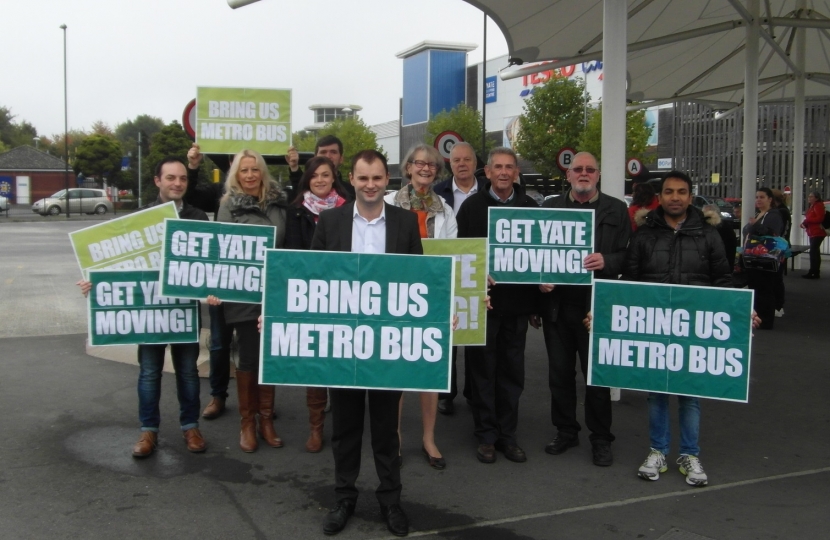 Thornbury and Yate MP Luke Hall has renewed calls on the West of England Partnership and South Gloucestershire Council to look into the expansion of the rapid transit and include Yate in its plans.

The Rapid Transit Bus system is already planned to connect most of South Gloucestershire’s ‘North fringe’ connecting similar large communities such as Emerson’s Green, Bradley Stoke with Bristol Centre and beyond, with stops including local employment opportunities such as Aztec West and Emersons Green’s Bristol and Bath Science Park.

In 2015 the MP launched a petition and campaign asking for the authority to ensure that the most north fringe communities such as both Thornbury and Yate were not left lacking connectivity to the rest of the regions public transport network.

It is estimated that 11 minutes will be shaved off  he travel time from the nearby Emerson Green to Bristol Broadmead route.

“Following on from recent Get Yate Moving Transport Campaign, it has become clear that residents really do desire greater, more reliable and connected public transport with the rest of South Gloucestershire and Bristol. Whilst expanding the Metrobus scheme to Yate will not be a silver bullet to solve our transport problems, it could very well form one of the pillars of improved infrastructure for the town. I hope that residents will join me in pressing the West of England Partnership and South Gloucestershire Council to begin looking into how Yate can be included”

The petition which forms part of the MP’s wider Get Yate Moving Campaign can be signed online at Lukehall.org.uk

The benefits listed by the partnership can be found here; https://travelwest.info/metrobus/benefits-social