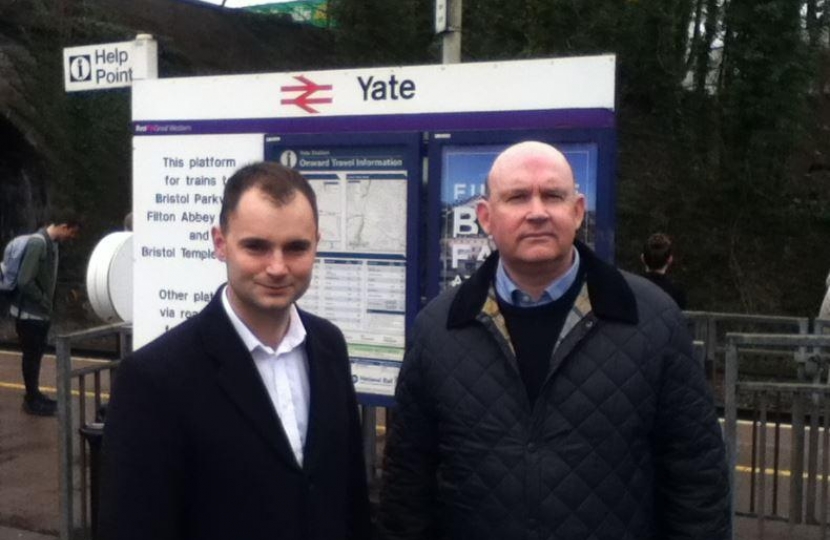 Rail passengers in Yate will soon experience more pleasant journeys thanks to a £14,000 council injection – although overcrowding remains a concern.

The improvement scheme to Yate Station is set to take place in April and include “much-needed” shelters for the ticket kiosk and machines.

The shelters have been welcomed by MP Luke Hall, who has sought improvements to the station and train services in his “Get Yate Moving” campaign.

The Yate and Thornbury MP said he was “delighted” that South Gloucestershire Council prioritised investment in Yate Railway Station.

He added: “My Get Yate Moving campaign has demonstrated that a large number of local people will consider using the Bristol service as an alternative to driving into the city if this can be achieved. This is a step in the right direction, but there is much more to be done to improve the service.”

South Gloucestershire Council decided to allocate its annual capital allowance for local trains to Yate train station after Mr Hall sought the opinions of commuters in the area.

Yate train station users were asked for their thoughts on the current standard of services, and where they thought the station and timetabling could be improved.

Many reported that the Great Western Railway (GWR) service was “overcrowded” in the morning and late afternoon.

A spokesman for GWR said: “We know our suburban Bristol rail services are in demand, but the only way to add an additional carriage at peak time would be to remove it from another train in the area.

“This is why we are starting work on the biggest fleet upgrade in a generation, delivering extra capacity where it is needed most.”

According to the spokesman, longer trains with more seats will be delivered over the next couple of years, which will increase the number of seats for customers travelling in the greater Bristol area by around 50 per cent.

The first of these trains will begin to run on the Severn Beach line this summer, but whether any additional carriages will be added to the Yate service remains to be seen.

The council is also pressing for central government funding for Yate train station, which will enable a 30-minute service to run from Yate to Bristol Temple Meads.

Cllr Sue Walker, who started the Friends of Yate Station group and chaired it for many years, said: "We've been campaigning with local rail users for improvements at the station for a number of years.

"I very much welcome news that we will now be getting the shelter, it's something passengers have been asking for."