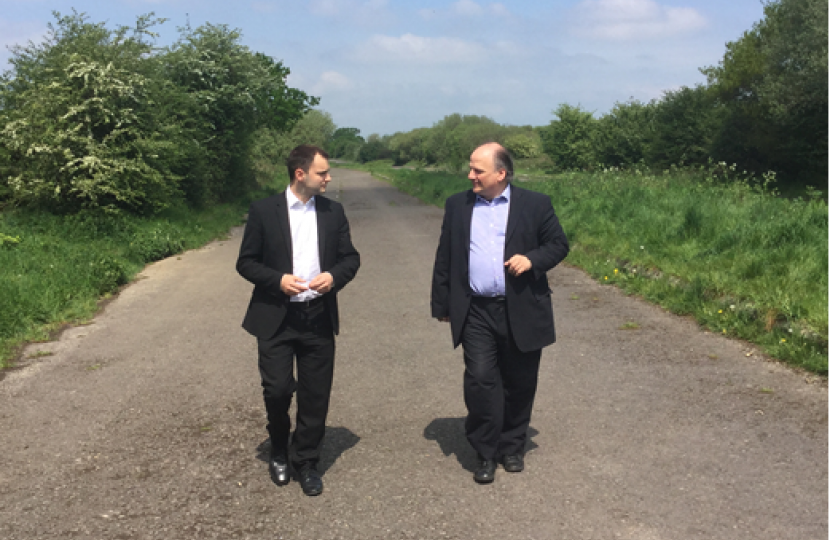 Luke Hall MP has started a campaign to finally open the ‘Road to nowhere’ in Yate. The stretch of dual carriageway, not open to vehicles, was abandoned after being laid and partially completed in the 1970s.

The land was bought for highway improvement purposes in 1974, and was created to link South Yate with Station Road.

The dual carriageway links the Rodford Way roundabout with the Badminton Road junction, opposite the Council Offices, and has the potential to unlock the flow of traffic in Yate, creating the missing arterial link in Yate’s infrastructure.

Ex Avon County Councillor Martin Radnedge explained the Council “abandoned the project at the time due to the rocketing price of steel, making the building of the bridge too difficult.”

Jon Shaw, a resident of Longford in Yate has said that “the Road to nowhere has become synonymous in people’s minds with a lack of aspiration for Yate as a town.”

Local MP Luke Hall and Matthew Riddle have held initial meetings with both the Council and Network Rail to discuss the completion of the project.

There are still a large number of issues to be examined and addressed. MP Luke Hall has stressed that the project would only be completed if assurances can be given that the existing green common land will continue to be protected from housing development. The MP has also stated that the need to examine segregated cycle routes as part of any investment.

Leading the campaign, Luke Hall MP said: “The Road to Nowhere is a symbol of the lack of investment in Yate’s infrastructure over the years. As a local man I have huge aspirations for our local area, so opening the Road to nowhere and investing in junction 18A onto the M4 would help to reduce congestion and get Yate moving.”

Council Leader Matthew Riddle said: “I am pleased to be working with a Luke to examine completing the Road to nowhere. This has long been considered ‘unfinished business’ by local people and we are working hard to achieve the aspirations for the future of the town.”