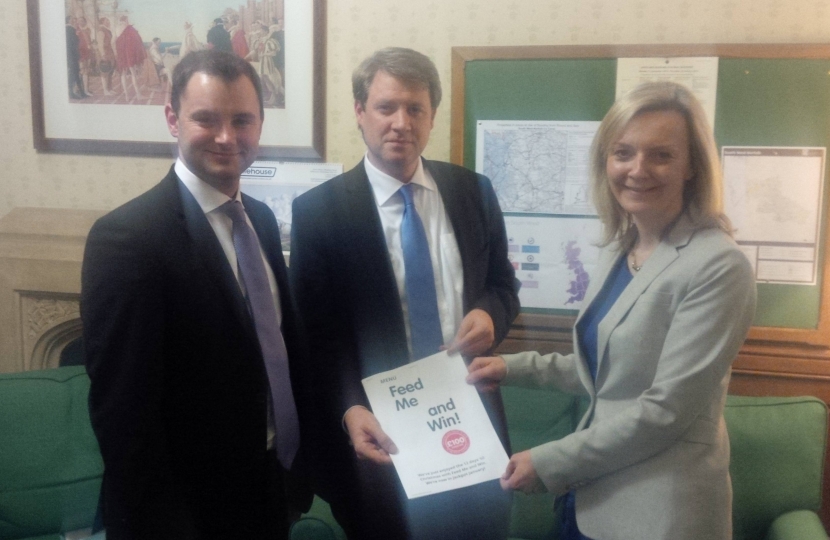 Local MP Luke Hall stressed the need to tackle the problem of food waste in a meeting with the Department for Environment, Food and Rural Affairs, earlier this week, ahead of a Parliamentary debate.

He raised the issue directly with Secretary of State for Environment, Food and Rural Affairs, Liz Truss, in a meeting also attended by Kingswood MP, Chris Skidmore. Luke highlighted much of the good work which South Gloucestershire Council have done in tackling excessive food waste in the local area, and urged the Minister to follow the lead they have set, in order to combat the crisis nationally.

At the meeting, Luke presented several of the local initiatives already in place, including; stickers on every residual bin with a reminder not to use them for food waste and recycling information videos for local residents. The schemes are being promoted through a series of local campaigns and presentations across South Gloucestershire.

In particular Luke praised, the ‘Feed Me and Win’ campaign where all four West of England authorities have come together to implement a scheme in which one household each week, in each local authority is rewarded with a £50 voucher, for presenting their food recycling.

Speaking afterwards, Luke said: “It is really fantastic to see South Gloucestershire at the forefront of UK efforts to bring down levels of food waste I am pleased that we are setting an example with initiatives like ‘Feed me to Win’ for the rest of the country to follow.”

South Gloucestershire Council are continuing to look into new ways to deal with food waste, and Luke remains hopeful that the work already done can be built on to inspire the rest of the nation to follow suit.