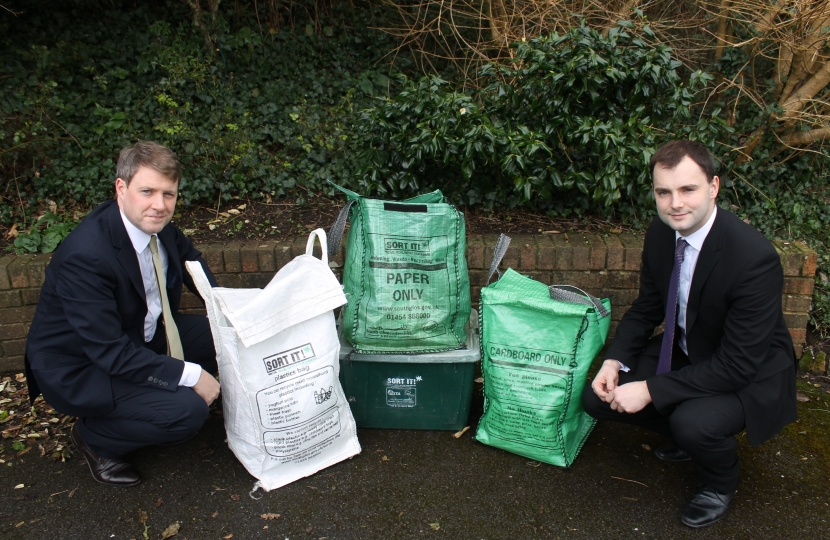 Two South Gloucestershire MPs; Thornbury and Yate MP Luke Hall and Kingswood MP Chris Skidmore wrote to South Gloucestershire Council Leader Matthew Riddle on Friday seeking reassurances over proposals to change the way waste is collected in South Gloucestershire. The letter is in response to the authority’s consultation on what it calls its ‘draft waste strategy’ which aims to set out the council’s strategy in increasing the areas recycling rates.

Both MPs relayed resident’s frustrations over past changes, highlighting the complexity of the current way residents are asked to recycle and referencing the confusion residents felt with alternate week collections with multiple bags for each type of recyclables.

The letter welcomed plans to simplify and increase recycling collections at the kerbside by providing households with a segmented recycling containers but both MPs stressed the need for there to be no limit on the amount of waste that each household could recycle to ensure residents will not be adversely effected by the change in capacity.

The Council are also consulting on reducing the size of the general waste or black bin which the council believes will reduce the £3m sum the council currently pays in waste going to landfill. Both MPs have objected to these changes.

Importantly for families, the MPs asked that a new universal nappy collection service was set up for any family that requested it arguing that families often required the additional capacity in the general waste bin to manage with nappy disposal.

The disabled and elderly were also in mind when the letter set out ways in which the council should find ways to help those less able in getting their recycling bin the kerbside . A recommendation that if wheelie bins could be provided that a mechanism be offered that would allow residents with mobility needs get the container to collection point.

Another aspect of the letter made a strong suggestion that any savings made by the council should be ploughed into helping with the financial cost of phasing out the green bin charge.