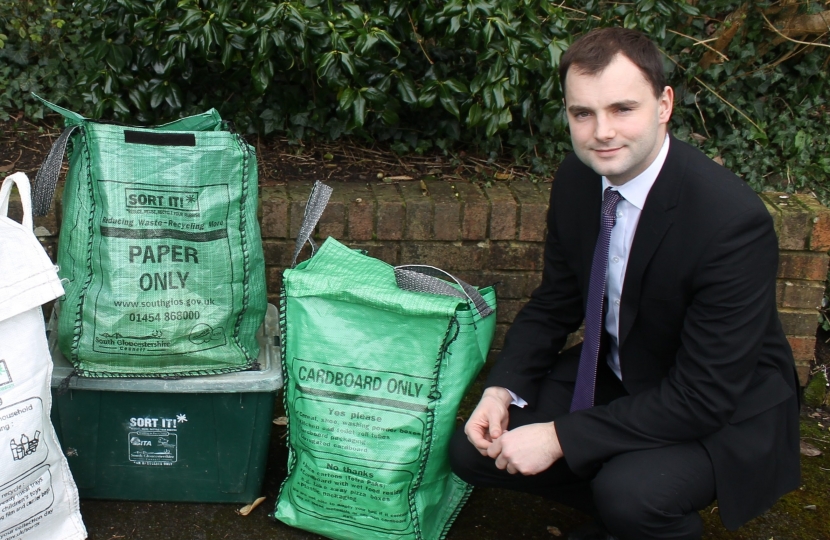 The plans involve moves and measures to encourage and improve recycling in the authority which include;

Luke Hall MP who responded in depth and in detail to the consultation welcomed the significant steps towards promoting weekly recycling, including a simplified box in place of the current bag system as well as kerbside collection.

In the original submission to the consultation the MP argued that he opposed the reduction of the general waste bin capacity on the grounds that large families would see further strain on their ability to dispose of their waste.

However in subsequent letter to the Chief Executive, Amanda Deeks, both Local MP Luke Hall and neighbouring Kingswood MP Chris Skidmore pushed for measures that would ease the pressure that any reduction would have.

The requested measures to offset the reduction were;

Following actions by both MPs, which included a meeting with Councillors and Directors, the measures now form part of the council’s strategy.

“I was of course disappointed that the council will be implementing a reduction in the Black Bin capacity however I am pleased that both myself and Chris were able to ensure that there were measures in the strategy that will reduce the impact on families such as the free nappy service, unlimited recycling and a way families can request a larger bin if need.

I also strongly welcome the improvements in the plans to help local people to recycle both in frequency and quantity, reducing the environmental impact of our areas waste.”