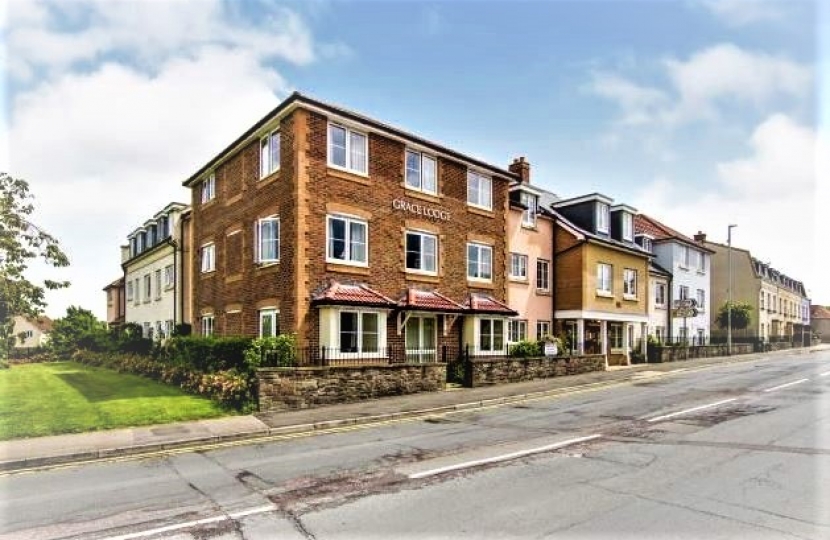 Following an approach from Luke Hall MP, South Gloucestershire Council have agreed to investigate extra signing and road markings in the vicinity of Grace Lodge Care Home as a priority, to improve safety for elderly residents.

Local MP Luke Hall previously met with residents of Grace Lodge in 2017 to discuss concerns about road safety in the area, and since then has been continuing to press South Gloucestershire Council and Churchill Retirement Living to review the measures in place for Grace Lodge residents.

Residents and staff of Grace Lodge on Rock Street in Thornbury previously spoke about the hazards of crossing the street to access nearby facilities and the High Street. With an elderly community, many of whom have visual or mobility impairments, a campaign was launched to deliver a zebra crossing for residents, as the current pedestrian crossing is too far away from the Lodge.

After Luke first got in touch, to try and solve the problem of delivery vehicles temporarily blocking the existing tactile paving and crossing points, the Council created two sets of advisory keep clear markings fronting the kerb edges of the footway outside Grace Lodge.

Now, following further intervention from the local MP, the Council have now created a draft set of proposals for signs and markings, which includes “SLOW” markings on the road, and crossing signs along Rock Street.

Engineers are simultaneously working on improvements to the southbound bus stop in Rock Street near the junction with Gillingstool. Whilst the scheme detail is still being worked on and finalised, possible proposals may include a buildout at the existing signalised crossing and a mini-roundabout, a pedestrian island with dropped kerbs and tactile paving on Gillingstool. Subject to comments received at the consultation, it is expected that the proposals will be implemented during the 2020/2021 financial year.

The consultation can be accessed at: https://consultations.southglos.gov.uk/consult.ti/Rock_Street_Bus_Stop/consultationHome

“It is absolutely vital that residents feel safe and secure in their communities and I am delighted that South Gloucestershire Council are acting so quickly to make this happen.

I encourage local people to make their voices heard via the consultation, or get in touch with my office, where I am always happy to help.”

"Since the High Street has been closed to traffic, Rock Street has become the main road through Thornbury, making it even more busy and dangerous than it was before. I’ve been asking the council for a number of years to install a crossing outside the Lodge to help my apartment owners get into town safely.

Many are in their 80s and 90s and find it difficult to cross, so with the recent increase in traffic I am very concerned for their safety.

The new signs are a welcome measure, but we really need a proper crossing, especially if the high street closure becomes permanent.”

Over the recent months and years, local MP Luke Hall has been campaigning strongly for wider availability of high speed Fibre Broadband connections. While 96% of homes already have a good connection, he has been working with the community to reach the remaining 4%.