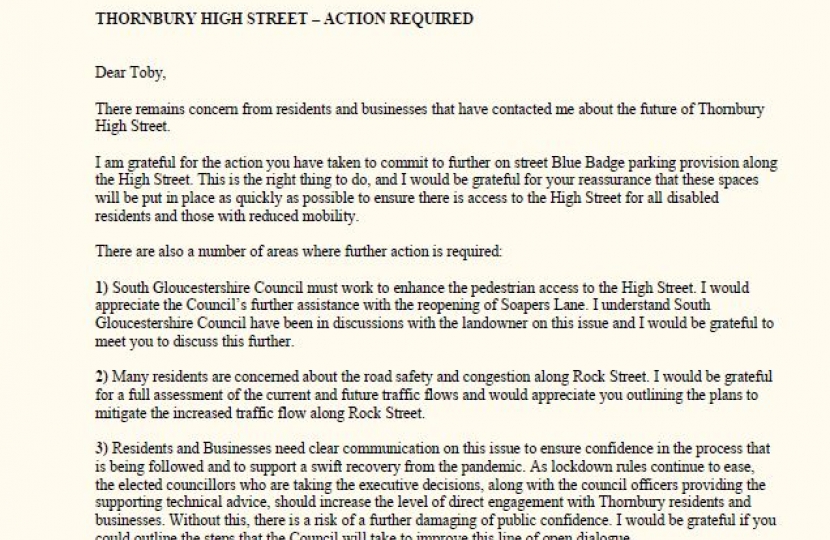 Following South Gloucestershire Council's decision to introduce a one-way system, with pedestrianised zones along the High Street, the local MP has made clear that the changes cannot and will not be accepted until further provisions and action is taken.

In his letter to the Council's Executive, Luke has called for the following:

2) A full review and assessment of the traffic flow and road safety along Rock Street, and the impact of the High Street's closure.

Writing in his letter, the MP stated: "...it is clear that the community has valid concerns which need to be examined further, and I would be grateful for your help to deliver an outcome for Thornbury which strengthens the High Street’s long-term future whilst making sure we remain a vibrant and accessible town for everyone in South Gloucestershire."

Having received varied feedback from the community, Luke had previously called for the Council to offer a fair and reasonable compromise. The MP succeeded in helping to ensure that a full pedestrianisation of Thornbury High Street was shelved, and instead, a one-way system was introduced, allowing essential traffic flow whilst strengthening the High Street's longevity and economic prosperity.

SOUTH GLOUCESTERSHIRE BUSINESSES SET TO BENEFIT FROM A SHARE OF A 1.5BN FUND

Local businesses who have missed out on business rates support, such as food wholesalers and brewers, are set to benefit from their share of a 1.5bn fund.