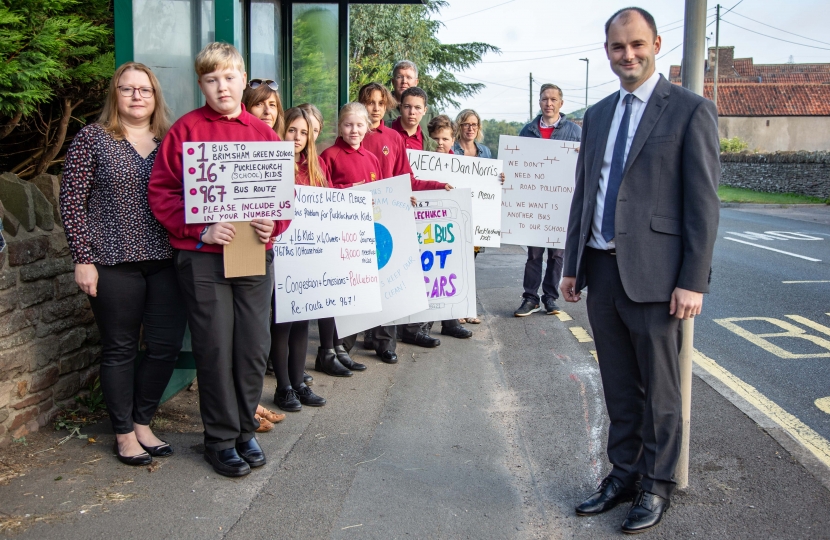 Member of Parliament for Thornbury and Yate, Luke Hall, has joined parents and local school children from Pucklechurch, in a campaign to bring a bus service to Brimsham Green School directly from their village.

The parents and pupils are concerned the current 967 public bus service by-passes Pucklechurch, leaving parents and families in Pucklechurch with a lack of direct school transport.

Instead, pupils are left having to either be driven straight to school by their parents, or driven 2.5 miles away to Westerleigh, to catch the bus from there.

Parents and pupils are instead asking for the 967 bus service to be extended the from Westerleigh to Pucklechurch, offering a greener and more viable option. This route would also not be exclusively a school route, and instead can be used by members of the public, creating a valuable link between Pucklechurch and Yate that would be of great benefit to be wider community.

Taking action, local MP Luke Hall is calling upon Dan Norris, Metro Mayor for the West of England, to complete a full review and reconsider the local parents’ campaign. Luke Hall has also asked for future funding to be targeted towards extending the 967 service, and for further clarity regarding the projected fare cost which WECA have proposed.

Local Parent, Justine Cox said: “As parents, we believe that it is absolutely vital that our children have the same opportunity as other children from the village, who are able to access busses to local schools such as Chipping Sodbury, Mangotsfield and St. Bernard Lovell.

We are simply asking for a viable, affordable and greener alternative to having to drive them to school or 2.5 miles to the next village to catch the bus.”

Local MP, Luke Hall said: “Ensuring that children have access to a close bus route to school is absolutely vital in order to enable them to continue going to Brimsham Green School safely.

Extending the bus route from Westerleigh to Pucklechurch will also vastly improve transport links between Pucklechurch and Yate, as well as creating green options for commuting in South Gloucestershire.”

The Campaign for Soft Plastic Recycling Continues in Parliament

Luke recently held a debate in Parliament to raise our bid to be a part of the soft plastic recycling trial with the Minister at the Department for Food, Environment and Rural Affairs, Jo Churchill MP

Luke stressed the importance of this scheme to our area, including: