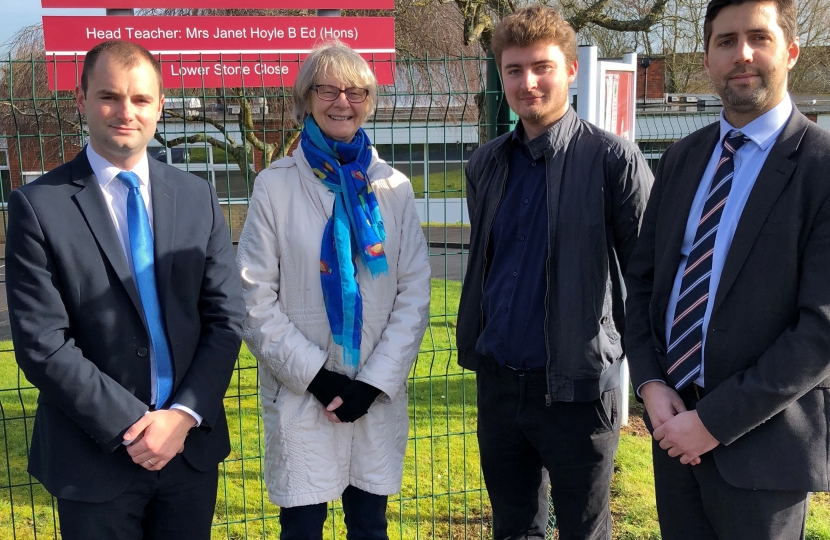 Local MP Luke Hall has welcomed the announcement that Watermore Primary School is set to receive increased investment, helping to secure a quicker and more efficient redevelopment of its premises.

As a result of Luke’s personal intervention, the overall funding for the redevelopment of Watermore Primary has been increased by £2m, bringing the total investment to £6.68m. The extra funding secured will allow a quicker build for students and staff, whilst minimising any potential disturbance for families and commuters.

With the Primary School currently operating on two separate sites, the rebuild plans to reunite the school on a single site at Lower Stone Close, whilst transforming the school’s facilities for both staff and pupils. The plans will see further improvements to lighting near the school and a new outdoor games area, as well as offering over 400 primary school places from September next year.

Luke has been supporting the school and Conservatives on South Gloucestershire Council, calling for the school’s redevelopment to go ahead in one single phase, as opposed to the two separate stages which had previously been suggested. Having recently met with Watermore’s Headteacher and school governors, Luke reiterated his commitment to making sure the school’s plans were prioritised, and reaffirmed his support for parents, teachers and students of the school.

The MP’s intervention followed the Government’s announcement that funding would be made available to South Gloucestershire Council, which could allow the two key stages of redevelopment to go ahead simultaneously.

The funding is part of the Government’s Land Release Fund, which enables local authority’s to release land more effectively and in turn, provide a financial boost which will advance the process of the Watermore redevelopment.

Backed by local residents, Luke personally wrote to the Leader of South Gloucestershire Council, Cllr Toby Savage, to make his formal recommendation that the money recently made available by the Government should be put towards delivering both stages of the Watermore redevelopment simultaneously.

“I am absolutely thrilled that South Gloucestershire Council have agreed to use extra Government funding to speed up Watermore Primary’s redevelopment”, said Luke.

The MP continued, “These are very exciting plans for everyone associated with Watermore Primary. With more school places and new and improved facilities, I know this will be hugely been beneficial for our community and future generations. I am delighted to have been able to help secure the extra funding needed to ensure these improvements are delivered at the nearest opportunity.”

Local resident Tom Howell, who lives nearby the Primary school said, “It is fantastic news that the Council will be using this funding to complete the stages of redevelopment at the same time. This will ensure a smooth transition for the school’s pupils, whilst alleviating any possible inconvenience for the wider community.”