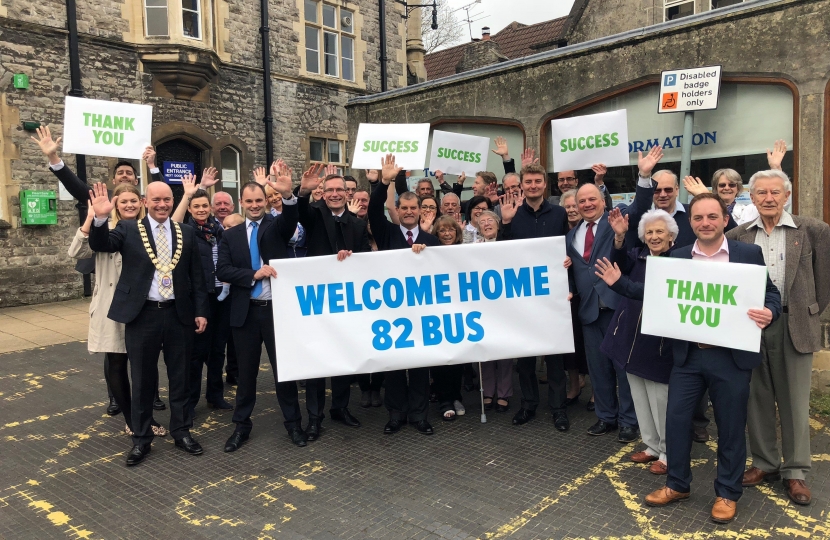 Local MP Luke Hall, Residents and bus campaigners were celebrating this week after a campaign to see improvements to the 82 Bus, including its return in serving Chipping Sodbury, proved successful as operator First Bus announced a raft of key improvements and changes that the campaign has asked for.

The service which originally ran from Gloucestershire via Chipping Sodbury, making the vital journey for many to Southmead Hospital.

However reorganisation from the Council’s supported services meant that an additional service for the first segment of the route meant that the 82 service began from Yate, instead of the Sodbury High Street.

Local MP Luke Hall, following strong feedback from residents in his “Get Yate Moving” transport survey, started up a petition and campaign asking for three key improvements to the service;

After the MP, alongside residents, local conservative councillors and campaigners gathered a petition of hundreds, met with First Bus last year, and organised a strong response to the Council’s bus consultation, the work has paid off with First Bus this week confirming that the service will now return to Chipping Sodbury, with increased frequency, double decker bus use for the service and earlier starts:

As part of a comprehensive review of services that serve Yate, there will be a number of improvements to the route and timetable of Service 82. Following numerous requests from customers the company has decided to extend the route beyond Yate to Chipping Sodbury. The majority of Monday to Saturday journeys will extend from Yate Shopping Centre to Chipping Sodbury via Station Road and Bowling Hill.

The extension of Service 82 to and from Chipping Sodbury will provide residents with a direct service to Bristol Parkway Station, Cribbs Causeway and Southmead Hospital. It is hoped that the route extension will be well used by customers.

The frequency of Service 82 will be improved to operate a more clockface hourly pattern of departures, compared to the current frequency of up to every 90 minutes. The improved frequency will provide customers with more journey opportunities.

To improve reliability and punctuality and operational performance, Service 82 will be inter-worked with Service X49.

Local MP Luke Hall, who led the campaign since the beginning said:

“I am delighted that working alongside local businesses, residents and campaigners across Yate, Chipping Sodbury and Frampton Cottrell that First Bus has listened to our calls for three key improvements to this vital service. It has taken some time but our campaign never gave up. I would like to thank each and every residents and campaigner who helped me secure theses improvement along the way”.