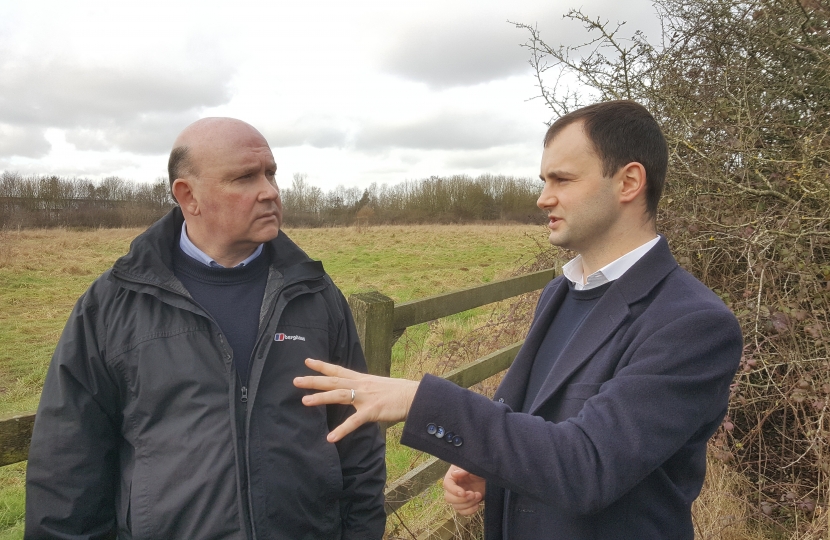 A debate on the West of Englands future housing plan (JSP) was held in Parliament on Wednesday as Local MP Luke Hall’s fight to see a review of the proposals was taken to the top.

The MP secured a debate within Parliament’s Westminster Hall where Housing Minister Gavin Barwell MP attended to hear the MP’s concern over the West of England and South Gloucestershire Council’s future Housing Proposals.

The plan, currently in the post-consultation response stage, proposes to see a 3,000 house development that crosses the A38 earmarked to the east of Thornbury’ Towns fringe, as well as 1,500 houses in Coalpit Heath Greenbelt and an extra 1,000 houses in the village of Charfield.

In an unprecedented step the MP has called on the Secretary of State Sajid Javid MP (Department for Communities and Local Government) to use his game changing section 21A powers to pause the joint plan to allow for an early Government inspection.

The Secretary of State can issue a “holding direction” if he wants to consider using his powers under section 21 of the 2004 Act. Section 21 allows the Secretary of State to intervene in the making of a development plan document where he believes that a local development document is “unsatisfactory” which has been the view of Local MP Luke Hall since the proposals were first announced.

Section 21A can help to ensure that a local plan does not proceed any further towards being adopted until such a time that the Secretary of State decides whether or not to use his call-in powers. It is believed that should a holding direction be exercised by the Government it will allow inspectors to review whether the spatial strategy that is being sought is going in the right direction.

The debate secured by the MP comes after recent setbacks for the South Gloucestershire’s segment of the plan, including the failure of the Buckover Garden Village to be included within the Governments Official Garden Villages, towns and cities programme launched last year casting doubt on local planner’s ability to deliver on the large scale proposal without central government expertise and assistance and which is considered by many residents as an extension of Thornbury town in all but name.

“I am taking the fight for a better and fairer housing plan to the top in Westminster and will be making the strongest possible case for Government intervention.

As a local man I understand these developments would put extreme pressure on our local schooling, medical services and crucially, our transport infrastructure. Our communities in Thornbury, Charfield and Coalpit Heath could not be clearer that this plan needs to be paused, looked at again, and reconsidered. Armed with 1000’s of resident’s views from my recent survey, I will be urging the Government to take the unusual step of intervening to pause the plan to ensure we get a fair deal for our area.”

In the debate the MP drew attention too;

The request for these game changing powers to be used comes as a recent survey conducted by the MP revealed that across the three communities almost 96% of residents were opposed to the current plan, with a similar percentage taking the view that urban areas such as Bristol should be taking a greater share of the numbers. It was the first comprehensive survey in the area which asked for residents views on the subject.

The fresh attention on the West of England plan in Westminster is hoped to place even greater pressure on the four authorities to reconsider elements of the proposals, with growing support for Luke’s campaign from the Prospective West of England Mayor Tim Bowles and local residents action groups.

“I am delighted the Minister will relay my request for a Holding direction to the Secretary of State, and that he will also be meeting with me to discuss our communities serious concerns over the Housing Plan. It is significant that the Minister reiterated that it is vital and a priority consideration that any Garden Villages must have the support of our community before any assistance is given to progressing the plan”.

If you would like to make your voice heard on this matter, there is still time to let us know your views. To do so, please do click on the following link: