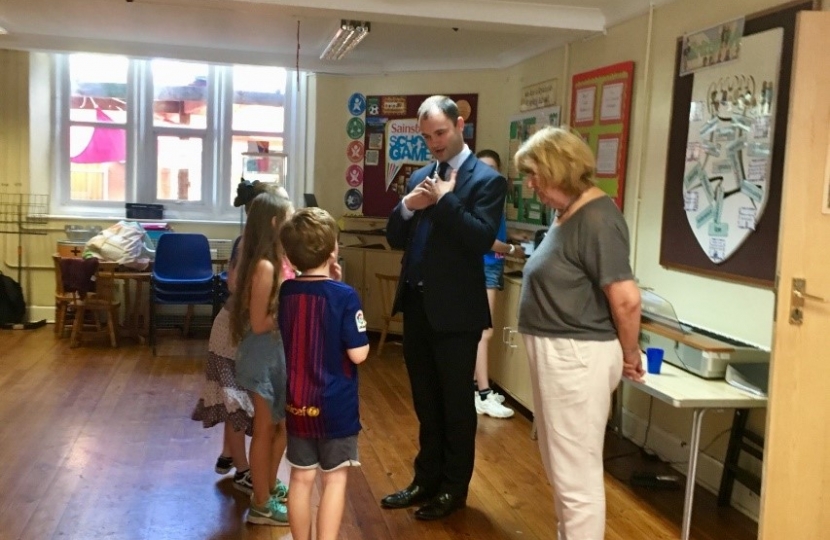 Local MP Luke Hall made a visit to Old Sodbury Church of England Primary School on Friday 5th July to speak to the students and hear their views about how we can improve our community. The pupils have been learning about democracy, elections and the UK System of Government and they were intrigued to hear about the day to day work and responsibilities of their MP.

Luke spoke about how he first became a Member of Parliament in the 2015 General Election, the differences between the House of Commons and the House of Lords, how MPs cast their vote in the chamber and how a law is passed through parliament. He explained how democracy means that anybody can stand in an election to represent the residents of an area no matter what their background is.

They also discussed the changes that could be made to improve both our local community and the country as a whole. The pupils raised various issues including reducing plastic waste to keep our seaside’s clean and tidy. The pupils then imitated members of the House of Commons and the House of Lords and voted on each stage to pass a bill through parliament.

Luke was given a tour of the village school and discussed with the Head Teacher and the Chair of Governors the possibility of extending the school and its grounds to accommodate the increasing number of pupils.

Local MP Luke said, ‘I thoroughly enjoyed meeting the pupils and staff of Old Sodbury Primary School, I received a very warm welcome. It was great to be shown around the school and was fantastic to see the pupils so engaged and passionate about tackling local issues in the community.’