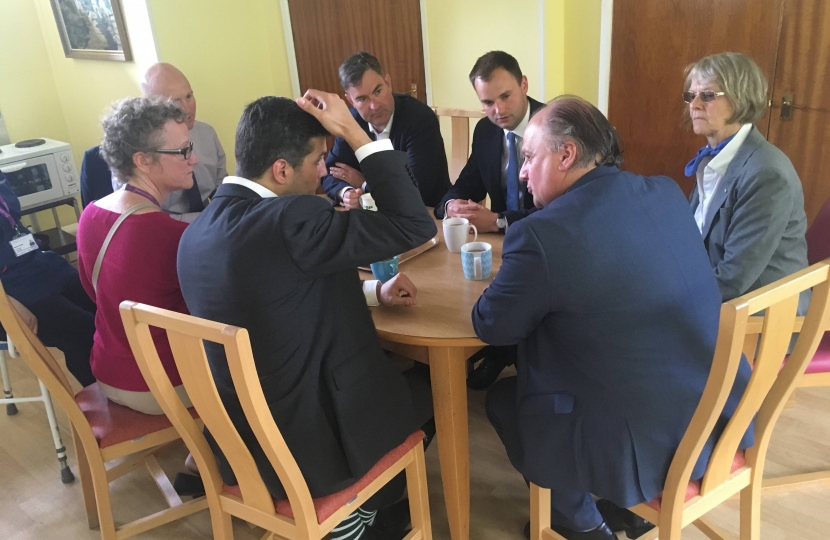 The MP, who lives in Yate, was provided with a tour of the unit where he met with staff including the new matron for the centre – Jason Broadley.

The MP’s visit follows previous concerns being raised by some residents over a new pilot of managing the hours for which the centre will accept new walk in admissions to divert patients to alternative sources of advice and/or treatment to minimise the number of times the unit has to close early at the end of the day when alternative services are no longer available.

Whilst recent monitoring and reports to the Councils health and scrutiny committee earlier this year had shown improvements in the MIU closing early on less occasions to ensure existing admissions were able to be seen, the new pilot being trialed hopes to manage the areas minor injuries admissions reduce these further by diverting patients to GPs, who also provide the service also provide a Minor Injuries Service, local pharmacies and NHS 111– whilst ensuring end of day service is maintained.

All GP’s have signed up to provide minor injuries services as part of a two year trial which is currently half way through the period.

Preliminary results from feedback from patients who use the GP Minor Injuries service have been positive with 93% of those who have used it saying they would recommend it to a friend, relative or family members. It is understood that since the new pilot opening hours system has been implemented that the MIU has diverted on one occasion during busy periods.

Luke Hall MP said; “As a Yate resident and our MP it was great to meet with Janet and Julia to fully understand the opening hours trial, relay residents’ concerns as well as having the opportunity to meet some of the excellent staff who we have serving our community at the MIU. I am encouraged that minor injuries services are being widened across our GP surgeries to increases the ways in which people can access services when in need but I will of course been keen to monitor the outcome of both trials on behalf of our town”

Janet Rowse said; “We always strive to provide high-quality care for those who need us and involve local people when we are developing services. Since the trial began we have been asking everyone who attends the MIU to complete a short survey and we have also been talking to people waiting. They have told us how much they value the service provided and we share that view. People have also told us that they understand the need to manage the numbers waiting and have come up with ideas on how we can improve the way we promote what the service can and can’t treat and when we do need to divert. All of these ideas will be reviewed and if anyone wants to share their thoughts with us we would ask them to email engagement@sirona-cic.org.uk.”