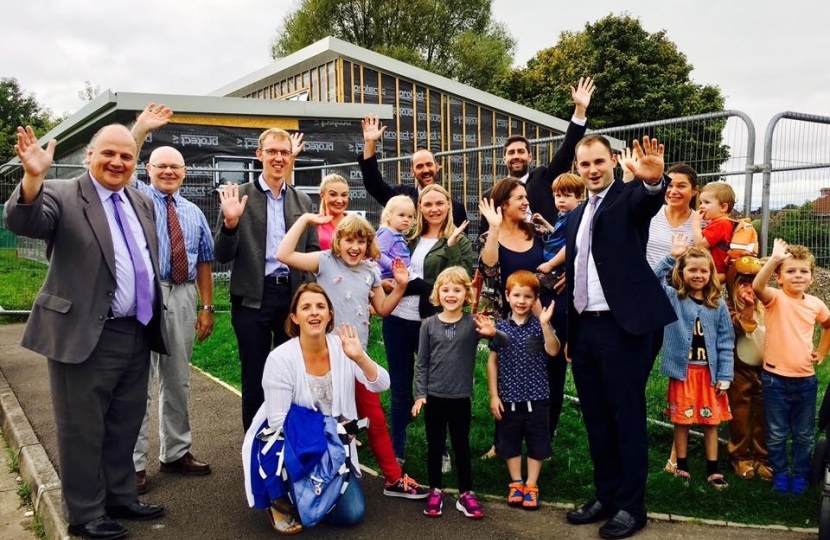 Thornbury parents, residents, teachers and children were celebrating this week after interventions by Local MP Luke Hall and Conservative-run South Gloucestershire Council have meant that the Pre-School currently being developed has been saved. The development comes after a report which recommends stepping in to save the at-risk new pre-school site was agreed by Conservative Cabinet members at Monday’s Council meeting.

The recommendation proposed by the Conservative administration, following a meeting between first-step pre-school building committee and senior councillors which was organised by Luke Hall MP, now means that the Council will now provide the remaining funding shortfall to see the building complete, which will see early years nursery care almost doubled from the existing 20 places to 40 in the coming year.

The news comes on the onset of the Governments implementation of up to 30 hours free childcare for working parents for 2-4 year olds, which has also doubled from the existing 15 hours already provided by the Government.

The pre-school was originally provided with a significant grant for 75% of the new buildings cost from the Governments Department for Education but the project became at risk after a shortfall became clear threatening the buildings completion and the extra capacity for childcare it provides.

After hearing of the news, local MP Luke Hall took action in organising an emergency meeting with the pre-school, Council leader Matthew Riddle, and the Council’s Cabinet member for Education; Toby Savage, to see what could be done to see the building continue.

The MP also made informal representations to the Ministers on behalf of the authority and the pre-school to back up the plan to help the pre-school.

“I am delighted that a way forward has been found to help First-Steps so that they can increase the amount of childcare available for our town and supporting working parents. This outcome really does show what can be achieved when our Conservative Councillors, our community and myself as our MP work together to see improvement for Thornbury.”

"We have been pleased to work with the pre-school and Luke Hall MP over the last few weeks on what is a complex situation and council officers have worked speedily through the various financial, legal and building issues involved. The pre-school are doing a fantastic job serving the local community and I'm delighted that we have been able to step in with this significant investment in the town's infrastructure and ensure that nursery places onsite are doubled as swiftly as possible to support more working families."