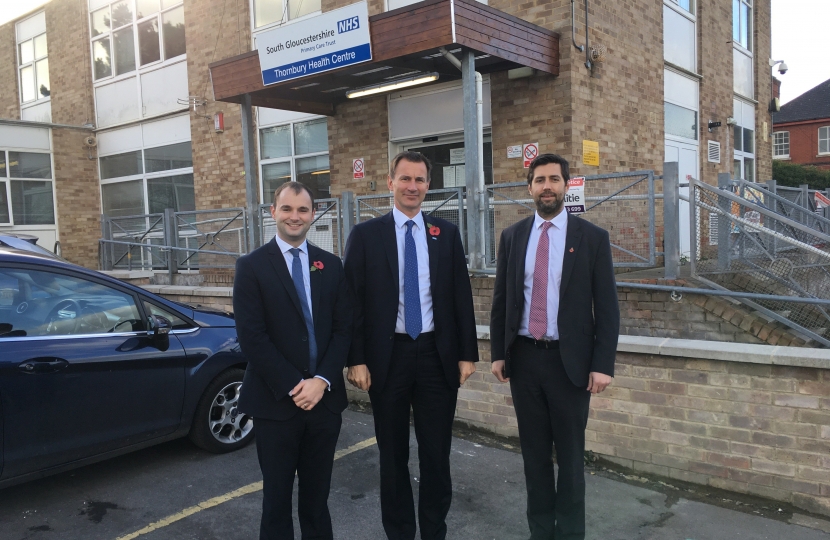 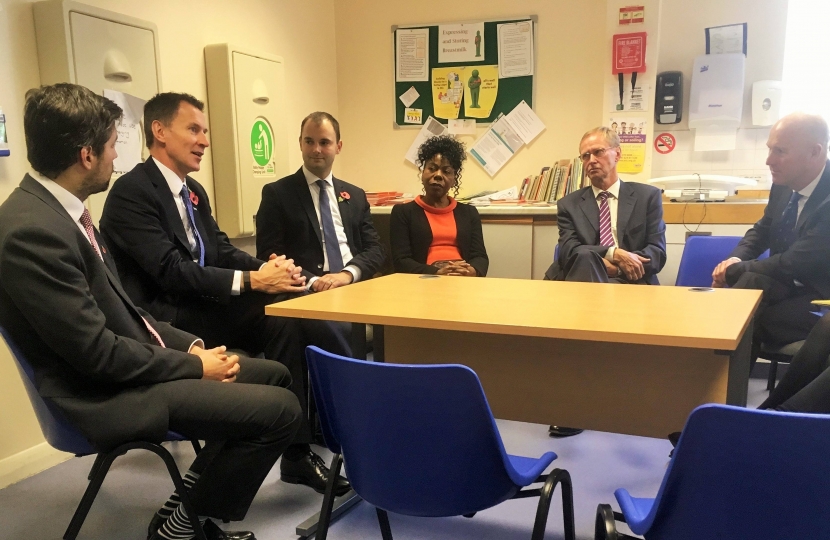 The UK’s Health Secretary, Jeremy Hunt, has met with Luke Hall MP to discuss the campaign for a redevelopment of Thornbury Health Centre.

Having been one of his top priorities for many years, Luke has been continuously liaising with both the local authority and South Gloucestershire Health Services to make steady progress on this issue. The campaign for a redevelopment has suffered several false starts in the past, but has been fired back into life during Luke’s time as MP.

Visiting the town last week, Mr Hunt joined the local MP in a meeting with representatives from South Gloucestershire Clinical Commissioning Group, and local doctors at the Health Centre, to establish how they could make a successful bid for investment from the Government.

Speaking to a local reporter, the Secretary of State said: “I absolutely understand the need, but the key to getting NHS funding is to be even more ambitious about what an expanded health centre could do in this area, in terms of keeping people healthy and happy in the community without extensive hospital care.

“I can see from what Luke has told me, what a priority the health centre is. There are clear issues with the fabric of the building that need sorting out. We had a very productive discussion about the best way to secure NHS support nationally for the redevelopment which I know is very important to people locally.

“We want the NHS to be the safest and best healthcare system in the world and that means a total transformation of our community services. It would be really exciting for a new health centre in Thornbury to be part of those ambitions.”

The meeting followed significant progress already made this year, with £100,000 of funding being granted in order to conduct a feasibility study into the redevelopment of the Health Centre. In addition, potential improvements to Thornbury Hospital’s Henderson Ward have also been announced.

Jeremy Hunt’s visit has raised fresh hopes that both projects could be completed together in the foreseeable future. The Minister presence has reignited efforts to deliver a redevelopment of the site, with a clearer plan of action now in place.

Luke Hall MP has said he felt the meeting between the groups was productive and went “really well”.

The MP for Thornbury said, “The Secretary of State was able to give us some clear guidance on what is likely to constitute a successful bid to central government for the money to redevelop the site. As the local MP, I want to keep the redevelopment of the health centre at the top of the agenda.”

“There are housing pressures on Thornbury making it difficult to make appointments and that’s why it is right to do everything possible to obtain Government funding for this key project.”

Cllr Toby Savage, South Gloucestershire Council deputy leader, who was also in attendance, said that having the meeting was "a great opportunity to make the case for the transformation the health centre".

It is hoped that the region’s Clinical Commissioning Group will now begin drawing together a renewed case for the redevelopment of the town’s Health Centre, to which the local MP has pledged his full support. The Health Secretary’s advice and insight is due to be taken forward, with a proposal for investment to follow accordingly.